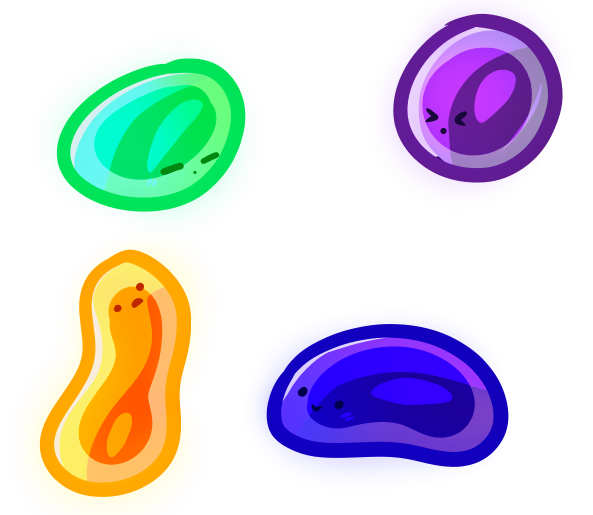 JellBeans are bean/orb shaped by-products, that have been accidentally created by JellHeads. For being friend-sized and easy to take care of, they are always in demand for being cute and kid friendly.
After all, they are just floaty colorful beans that don't require anything but a bit of energy and water.
Other than floating around and being squishy, they don't do much!
Great pets, especially for being very customizable!
JellHead researchers are a big fan of these little by-products and have given them the name of "JellBeans" because of their (Jelly)Bean resembling shape.

JellBeans always constist of just a blob shaped body made of the original JellHeads Jell and a singular inner Jell aswell.
They are always blob/bean shaped and can not have any other kind of shapes or edges. They stay round, even if you (for some unknown evil reason) stuck your JellBean into a popcicle form and froze them overnight, they will go back to their bean-form!
For being a blob of jell that does not have a core of any sort to create more Jell, the Jell is more stationary and can turn less transparent and have a more dense outer Jell. Meaning, any transparency is fine, even if it differes from the original Jell!

JellBeans are mostly the size of a hand's palm or smaller, but it also can depend on the size of the JellHead.

There are multiple types of JellBeans, of which some are categorized.

JellBeans mostly just float around after any kind of Jell-related energy source, such as other JellBeans, JellHeads or Shards. That kind of "behaviour" is possibly the base for modifications such as "JellLimbs", where seperated Jell still follows the JellHead.
Just like JellHeads, they can sense and map out those energy sources but on a much smaller scale, yet also on a more precise level than JellHeads, due to their smaller size.
The reason why they follow those energy sources is to maintain themself. Since they cannot "eat", they instead absorb energy that is radiated from any energy source to maintain form.

Because of JellBeans not constantly moving with any type of flow, like regular Jell in JellHeads, the Jell slightly solidifies and gets denser, changing the Jells transparency.
Also not being able to consume things like JellHeads do, their colors can also slightly shift and differ from the original. They can also start shrinking over time due to dehydration.
In prevention to that, JellBeans can sometimes be found floating on bodies of water, such as ponds, puddles, rivers or even bird baths to reabsorb liquid and stay in shape.

Other than that, JellBeans don't have any type of intelligence like JellHeads, as they don't have a core to store any information.
The Jell only follows basic things to keep them self up, such as floating after energy and rehydrating.

If the JellBean is split up into two or more pieces, for some odd reason, they will relocate themself just like they do with energy sources and re-blob together.
That should normally never happen, unless someone violently starts swinging kitchen knives at them.

JellBeans are all created by JellHeads. JellHeads push out waste out of their bodies to have them dissolve or be released into the enviroment.
The Jell is marked as waste to be able to split off the ends. In very uncommon cases, portions of life energy get transported or trapped into those ends and are split off.
It is tiny specs of life energy which prevents it from disappearing.
This is how JellBeans are created.

People love to customize and personalize their pets. With JellBeans it is no difference!
They may not have fur that can be shaped and styled, but a nice and durable surface to work with.
You can:
-Print little faces for your JellBean and stick them on like temporary tattoes for kids
-Have them wear accessoiries like cat ears and tails, bows and ties, or even a set of attack helicopter parts.
You can simply just stick them into the Jell and it will hold it, because for some reason it does not reject it and we can fully take advantage of that to create JellBean-copters!

Taking care of a JellBean

Taking care of a JellBean is very easy! All you need is somekind of Jell-related energy source and some water.

The energy source can be anything from a whole JellHead to float nearby, to energy infused bags and backpacks to whole terraria and enclosures, decorated with active crystals.
Backpacks are a popular option for people to take JellBeans with them and not lose them, as they will float back. Also is it nice to flex on people like people do with rare pokemon cards.
The material has to be made of energy-infused material or it won't be of use! Making sure to get a new bag once every decade is also recommended, as the energy in the fiber might have depleted.

The water can be placed anywhere, or even be sprayed directly at the JellBean, for it to absorb the water droplets.
Some people like to place them in glasses of water and watch them absorb water like orbeez.

Only keeping non-toxic or -harmfull JellBeans is recommended.

In some cases, when submitting an art or literature claim of your or another JellHead, there is a chance of discovering a JellBean there, that may have spawned before or after that.
Chances are random, and sometimes you may not even notice the JellBean floating right behind you or your JellHead.

"Shinies" are the codeword for locations, that seem to have something that radiates sometype of energy.
In some cases, it can be a random JellBean that you can find at that location.
In rare cases, it can even be unknown JellBeans or in even rarer cases, golden JellBeans.

In some events, you can obtain limited special JellBeans or even get JellBeans as a reward for specific prompts or achievements.